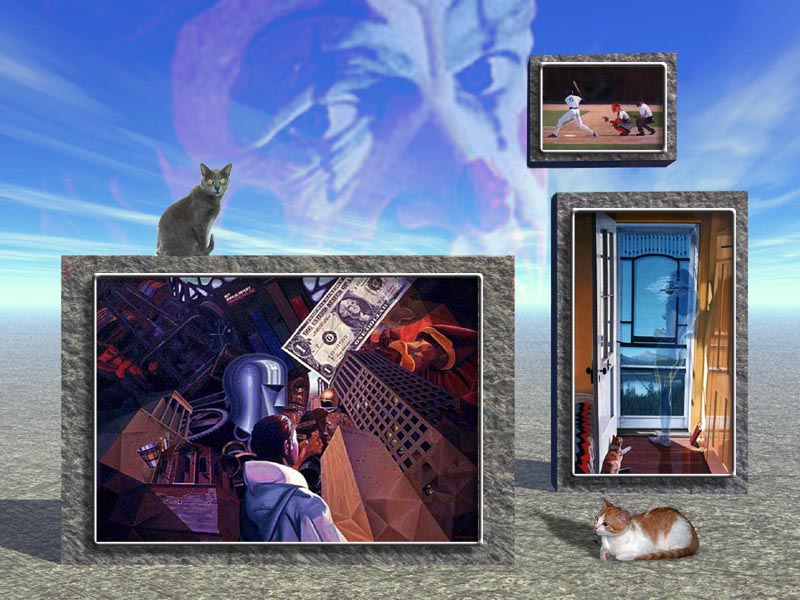 My Art Show: A digital image made by combining an image generated in Bryce,with images of my paintings from this site and digital photos of my two cats: Piper(the Russian blue cat) and Penny. Combined and adjusted in Adobe Photoshop.

Anything that you wish to know about me or my work I'll be happy to tell you. Just go to the "contact me"
link at the top of every page on this site and I'll respond by e-mail...generally within 24 hours.

For more years than I care to think about I worked in the advertising business as a commercial artist.
I was involved in the design and production of letterheads, logos, packaging, displays, brochures, catalogs,
annual reports, magazine and newspaper ads...in short, just about all of the "collateral materials".
I was employed by an engraving firm, art studios and advertising agencies. I also operated my own art studios.
I was, in order: a staff artist, a graphic designer, an art director and finally senior art director.
My work won more than a few of the awards available in the industry, including art director awards.
My name was never on any of those awards.

During those years I enjoyed painting and drawing in my spare time for relaxation.
One day I entered a painting in a show in Phoenix AZ and won first prize in the oil and acrylic painting category.
It was not the first award my work had won, but it was the first award that had my name on it instead of my boss's.
Other shows and prizes followed and soon after that I moved to the mountains to concentrate on painting.
Through the late 1970's and 1980's I entered every national juried show that I could afford to enter.
Shows such as the annual at the Butler Institute of American Art in Youngstown, Ohio which, at the time that
I was entering that show annually was accepting 135 works out of over 1300 submitted, so that just getting accepted
to the show was (in effect) an award, of sorts... I not only got accepted but won a couple of awards.
The National Society for Painters in Casein and Acrylics
in New York City was another difficult show to get into. My first entry there won an award, my second also won
an award and an invitation to join the Society. (Full membership is by invitation only). I also entered the
Knickerbocker Artist's annuals in New York City four or five years in a row and qualified to apply for admission
into the organization, but I never applied.

A few years ago I bought a computer and several graphics programs. After playing with these programs for a while
it occurred to me that I could plan paintings using these programs. Some examples of paintings that I planned completely
or partially on my computer are Rose.psd,  Peter's Bike, Casual Statements, and Sixtieth Birthday .

Gradually, I began making more digital images and fewer paintings.
The computer is an incredibly creative tool and it is very fast! You can cycle through various ideas quickly...try this...
try that...there is an undo button. Nothing is permanent until you save it...and even that is not permanent since there is
a "save as" function and files can always be deleted. My style of painting is very precise and I am very slow!
The image  A Painter's Eye is a good example...I could see it as a wall size painting,
and I could do it...and it would be better...but it would take me at least a year to render.

I established this website for exposure. I have sold from this website but that was never the motivating factor.
The idea that people have access to representations of my work on a 24/7 basis world wide is exciting to me.
My website statistical reports indicate that I do indeed have visits from people worldwide.
The alternative is the gallery and show scene. Been there, done that.

I have done my best to balance the colors of the images representing my paintings.
It's difficult to accurately portray the color of reflective art in the transmitted color of computer monitors...
especially when you consider the different types of monitors, browsers and the range of screen resolutions.
The images I present here are small out of necessity. My acrylics tend to be smooth with very little impasto
and the brush strokes are not readily discernable but I work with a lot of what I call characteristic detail.
To give you a better feel of what my paintings are really like, I have prepared a demonstration
to see click here.